Who Are San Quentin’s Most Famous Inmates? 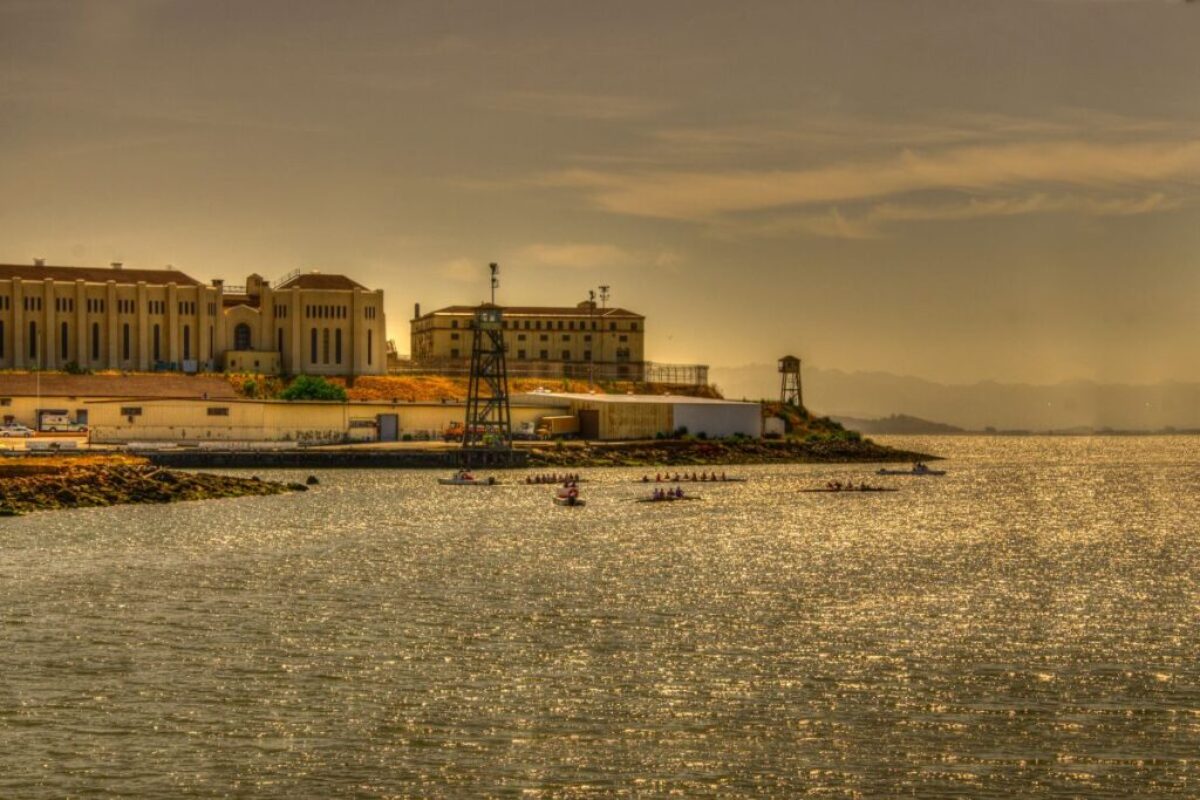 San Quentin State Prison or SQ is a California Department of Corrections and Rehabilitation state prison, in the unincorporated community of San Quentin in Marin County.

The prison has a very long history, being opened in 1852. In fact, it’s the oldest prison that is still continuously operating in California.

All of California’s male death row inmates are housed in San Quentin. Since 1996, all of the prison’s executions have been done via lethal injection. However, the prison still has a gas chamber. In addition, it formerly had facilities for carrying out executions through hanging.

Despite its notoriety, no executions have taken place in San Quentin Prison since 2006. Be that as it may, you still wouldn’t want to end up there. After all, it is home to many of the most violent criminals in the United States, making it a very dangerous place to be.

Furthermore, gang life is prevalent and almost unavoidable to get into. Therefore, if you’re lucky enough not to be on death row, then you still run the risk of being shanked. That said, this is something that is unfortunately true for most jails and prisons across the United States.

In this article, we’ll talk about San Quentin famous inmates. Besides that, I’ll also discuss some interesting facts that you should know about. So without any further ado, let’s jump right into it!

Charles Manson needs no introduction. After all, he’s one of the most notorious criminals in U.S history. Back in 1967, he started a cult called the Manson Family, where he and his followers conducted a series of murders from July to August 1969.

One of his victims is Sharon Tate, who’s among the most gorgeous and well-known Hollywood celebrities of the period.

The primary motive of the Manson Family killings was to incite a race war.

While it’s contested if he ordered the murders himself, it is known that Charles played a key role in their taking place. After all, he was the leader of the cult that committed the atrocities that are still well-remembered to this day. In fact, Charles Manson is easily one of the most famous and vilified criminals in history.

Few serial killers have garnered a reputation that’s as notorious as Richard Ramirez. Dubbed the “Night Stalker” and “Valley Intruder”, his crimes took place from June 1984 to August 1985.

During the time, he terrorized unknowing victims from the Greater Los Angeles Area and later, the San Francisco Bay Area by committing murders, assaults, and burglaries.

Richard Ramirez was apprehended on August 30, 1985. He was charged with 13 counts of murder, 5 attempted murders, 11 sexual assaults, and 14 burglaries.

He received the death sentence, which wasn’t carried out until he passed away in Marin General Hospital because of complications brought about by B-cell lymphoma.

Sirhan Sirhan is the famous assassin of Robert F. Kennedy. He’s a Palestinian who shot the U.S senator and then Democratic Party presidential candidate.

According to him, he killed Kennedy because he believed he was personally betrayed when Kennedy openly supported Israel during the Six-Day War.

At first, Sirhan Sirhan was sent to San Quentin to be executed via gas chamber. Just 3 years later, his sentence was commuted to life imprisonment after California’s Supreme Court declared capital punishment to be cruel and inhumane regardless of the crime.

San Quentin no longer houses Sirhan Sirhan. Ever since his incarceration, he’s been moved to various prisons.

Today, you can find him at the Richard J. Donovan Correctional Facility in San Diego County, California where he continues to serve out his life sentence.

When you think of “tough guy” actors, Danny Trejo is probably one of the first people that comes to mind. However, did you know that before he found success in Hollywood, he was a juvenile delinquent? As a result, he ended up serving time inside San Quentin Prison starting in 1967.

Fortunately, Danny Trejo was able to turn his life around. He began acting in the 1980s, slowly working his way up the industry. Now, he’s arguably the most noticeable faces in Hollywood.

Hans Reiser was a successful computer programmer and entrepreneur who was best known for the creation of the ReiserFS computer file system.

Sadly, his life changed for the worse after being convicted of first-degree murder. He killed his wife, Nina Reiser, following a heated argument over domestic matters.

The initial conviction of Hans Reiser was overturned following a plea deal. He now serves time for second-degree murder. Needless to say, he won’t be a free man any time soon as he’s serving a 15-year to life sentence with a parole committee refusing him back in 2020.

Richard Chase, otherwise known as the “Vampire of Sacramento” was an American serial killer, necrophiliac, and cannibal. He murdered 6 people within the month between 1977 and 1978.

Before committing his series of crimes, Richard Chase was already known to be mentally ill. He was briefly institutionalized in a mental hospital where he was diagnosed with schizophrenia.

In addition, during his time there, the staff gave him the nickname “Dracula” due to his affinity for blood.

All in all, Richard Chase took the lives of 6 people. Because of that, he got the death sentence, which was to be carried out via gas chamber. Unfortunately, that sentence was never acted upon because he took his own life on December 26, 1980, by overdosing on medications.

William Bonin has the unique distinction of being the first criminal in California to be executed by the manner of lethal injection.

Also known as the “Freeway Killer”, Bonin committed the rape, torture, and murder of 21 boys and young men. Besides that, he is suspected of killing 15 more people.

Unlike the other people on this list, William Bonin didn’t exclusively act alone. He had 4 known accomplices throughout his criminal career. All of which were apprehended by the authorities.

Due to the number of his victims and his distinction of being the first criminal to be executed via lethal injection, Bonin has become the “posterboy” for death row inmates in California. To this day, he remains to be one of the United States’ most well-known murderers and sodomites.

Charles Ng is a Hong Kong-born serial killer who is believed to have tortured, raped, and killed 11 to 25 victims with the help of his accomplice – Leonard Lake.

Most of his crimes happened at Lake’s cabin, which is situated in Calaveras County.

As of now, Charles Ng is on death row at San Quentin state prison. If his sentence ever gets carried out, he’ll die by lethal injection. However, this seems unlikely given California’s unwillingness to carry out the death penalty due to the debate on its morality.

With that being said, the victims of Charles Ng and his accomplice weren’t singled out because of their age, sex, or gender. The two usually killed and tortured men and infants. However, they frequently enslaved the women and sexually assaulted them before eventually murdering them.

It wouldn’t be right to leave Randy Kraft out of any conversation about serial killers. After all, he has got to be the most prolific ones in U.S history. From 1971 to 1983, he’s believed to have tortured, raped, and murdered around 16 to 67 people in California, Michigan, and Oregon.

Kraft is known as the “Scorecard Killer” as when he was caught, a list with 61 entries containing cryptic references to his victims was found. Despite that, due to lack of evidence, Kraft was only charged with 15 murders along with 2 counts of sodomy and 1 count of emasculation.

Needless to say, Kraft was given the death penalty. As of the time of writing, he’s still waiting for his sentence to be carried out. Once the day comes, he’ll be executed via lethal injection.

Like Danny Trejo, Merle Haggard was an inmate at San Quentin Prison before he was able to turn his life around for the better. Upon his release, he became a famous country singer, songwriter, guitarist, and fiddler. Across his music career, he’s won countless awards.

Merle Haggard was caught and arrested in 1957 for trying to rob a roadhouse. He was then put in Bakersfield Jail, where he attempted to escape. After getting caught, he was then transferred to San Quentin in 1958.

During his stint at the prison, Haggard began a brewing and gambling racket. After some time, he was caught and then sent to solitary confinement. However, despite that, he still didn’t turn into a model inmate. Luckily, he eventually changed for the better and was pardoned in 1960.

The United States is home to the world’s largest prison population. As a result, it naturally has a plethora of notorious correctional facilities.

One of the most notorious of these facilities is San Quentin State Prison, which is California’s oldest operating prison. Moreover, it’s the only prison in the state to carry out capital punishment. Also, it has the largest death row population of any U.S prison.

If anything, San Quentin Prison is the last place you’d want to end up in. Be that as it may, not all inmates there are destined for execution or a life of crime.

Some of them are actually good people that have committed mistakes that simply need to get rehabilitated. Prime examples of such people include Danny Trejo as well as Merle Haggard.

(Related: Can You Bail Yourself Out Of Jail?)

Can You Bail Yourself Out of Jail? Jail Uniform Color Codes And Their Meanings

US Prison System, Most Popular

The Different Types of Prisons Explained

What Exactly is a Prison Consultant?